Cloth Line was a magical equipment embedded with shielding magic to protect Hebrion Academy’s students from harm. The use of Cloth Line was a staple for everybody who entered the Shadow World. The Cloth Line itself looked like a tailored coat. A single blue jewelled badge adorned the lapel.

This of Cloth Line could only be tuned to protect from either physical or magical attacks due to the nature of magic crystals.

The Tower of Magic developed the second generation Cloth Line with the help of Desir Arman.

The members of Desir’s Party were the first to be issued with the second generation Cloth Line. Moreover, each member received a custom made Cloth Line. 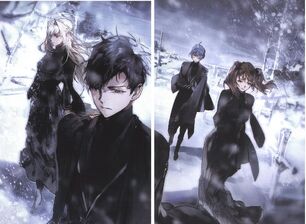 Although it had not been enhanced much in terms of power, a few functions had been added, including a thermal heating function.

As usual, the Starling Party was the first to receive the third generation Cloth Line.

Community content is available under CC-BY-SA unless otherwise noted.
Advertisement